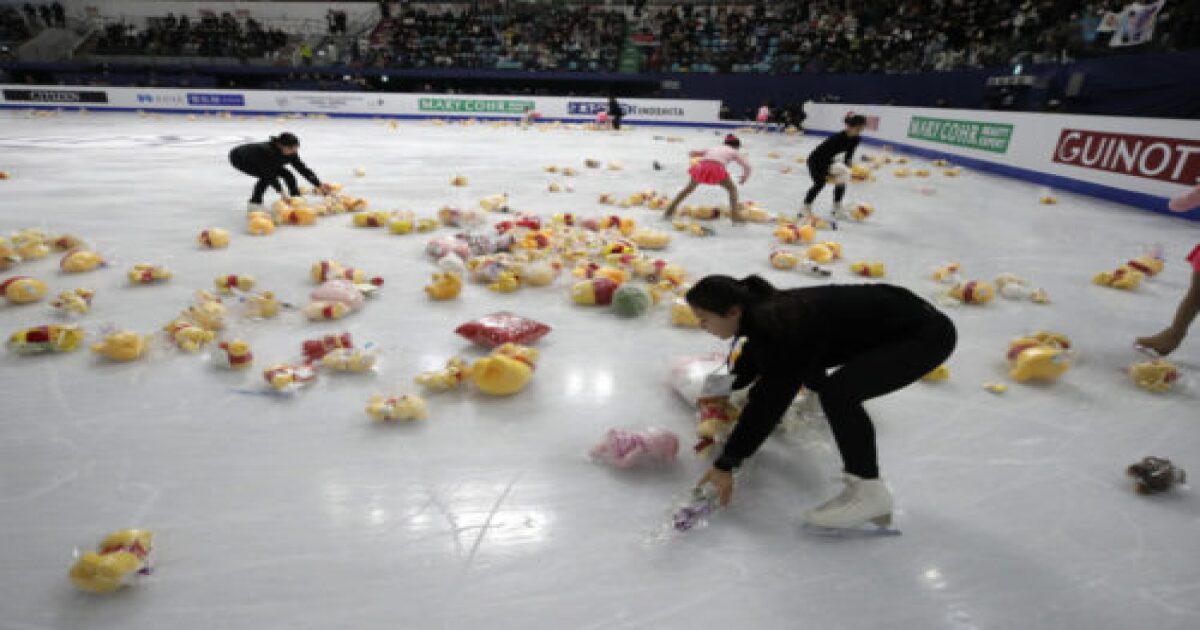 If you are a fan of figure skatingor even if you catch it once in a while TVyou may have noticed fans throwing gifts, especially stuffed animals, onto the ice when a skater completes their routine.

While it’s pretty obvious that goodies are meant to be artist gifts, why would skating fans choose stuffed animals as a way to honor their favorite athletes?

It might sound a bit strange, but it turns out that multiple factors have made throwing stuffed animals onto the ice a tradition, including practicalities like avoiding a mess on the ice or concerns about the safety of skaters.

The concept of fans giving flowers to their favorite skaters seems like a more obvious practice, but the practice has been frowned upon by American figure skating for over 20 years, with some rulebook basically prohibiting it. From Sports Illustratedthe group prohibited the sale of flowers on its sites of reception of the national competitions from 1989.

That didn’t mean flowers weren’t allowed, but it did mean that if a fan was determined to give a skater a bouquet, they would have to bring the flowers into the arena themselves. This made it more common for fans to simply buy their gifts at the arena, where stuffed animals were in abundance.

While some skaters still regularly received flowers at the time – particularly 1988 Olympic gold medalist Brian Boitano – this was usually done through the tedious process of walking the athlete around the ice, waving to cheering fans individually and take gifts from them. The practice of tossing presents on the ice seems to have started after it was realized that having each skater meet fans and collect presents after a routine simply prolonged the event too much.

“You would walk around, and you would probably take two to three minutes, and then greet anyone who gave you a rose or something,” said 1992 Olympic silver medalist Paul Wylie. told NBC Sports. “People wouldn’t throw them away. They were standing at the edge of the barrier, and then the skater walked by and had this meet and greet. Based on that, it was taking too long.

After this practice ended, fans began to regularly throw flowers and gifts on the ice after each routine, but this created New problems. Not only did the flowers smash when thrown on the ice, causing delays in cleanup, but, according to NBC SportsUS Figure Skating banned flowers in 2001 following the September 11 attacks and subsequent fears that anthrax was being used to poison high-profile figures.

“In the 90s it was popular to do flowers, which they don’t allow anymore because of the debris,” said 1992 Olympic champion Kristi Yamaguchi. told NBC Sports in 2015.

According to a 2001 report by the Los Angeles Times, Larry Kriwanek, chairman of the organizing committee for the 2002 US National Figure Skating Championships, said the decision to remove the flowers was already close to being made even before the September 11, but the event resulted in the ban. be enacted more quickly.

“Flowers have always been a problem. Even when packed, the staples jump out and become a hazard,” Kriwanek said. “The flowers were going to be eliminated. It was just a matter of when.”

Despite all the bans and changes for American figure skaters, there is no worldwide ban on flowers, so you may still see them thrown on the ice or given to skaters from other countries.

With flowers officially out, fans opted for the neater option of stuffed animals, which are often even more personal than flowers and can obviously last longer.

Stuffed animals are also much easier for “sweepers” — aka the kids who collect the presents after a skater’s performance — to pick up and get out of the ice quickly, avoiding delays. Stuffed animals can also be easily donated to children’s charities after such an event, as many skaters receive too many gifts to even take home.

Olympic bronze medalist Jason Brown donated stuffed animals tossed onto the ice after a series of performances in 2014 to Ronald McDonald House charities in Chicagoland and Northwest Indiana and said he plans to look for charities to make similar donations wherever he competed.

“After every skate people throw stuffed animals and treats to show their love and I really wanted to give back,” Brown told CBS Chicago.

If you have ever attended a hockey game, you may also have seen stuffed animals thrown on the ice, although these are often specifically for charity, not hockey players.

Many hockey teams across the country hold specific nights where they participate in a Throwing teddy bear, asking fans to bring a teddy bear and throw it on the ice. The stuffed animals are then donated to local charities.

In January, a minor league hockey team in Hershey, Pennsylvania broke a world record when fans threw more than 52,000 stuffed animals onto the ice. The previous world record was 45,650, set by fans of the same team in 2019.

Tonight, we are BREAKING our own record! The 2022 @GiantFoodStores Teddy Bear Toss has produced a grand total of 52,341 stuffed animals! THANK YOU! #TeddyBearTossHershey #HersheyBearsCares pic.twitter.com/0WUEYd6ULy

At least now you know that those mountains of stuffed animals that end up on ice often find a loving home! This makes the whole tradition even sweeter.

This story originally appeared on The simplest. To verify The simplest for additional stories.

10 money mistakes and how to fix them