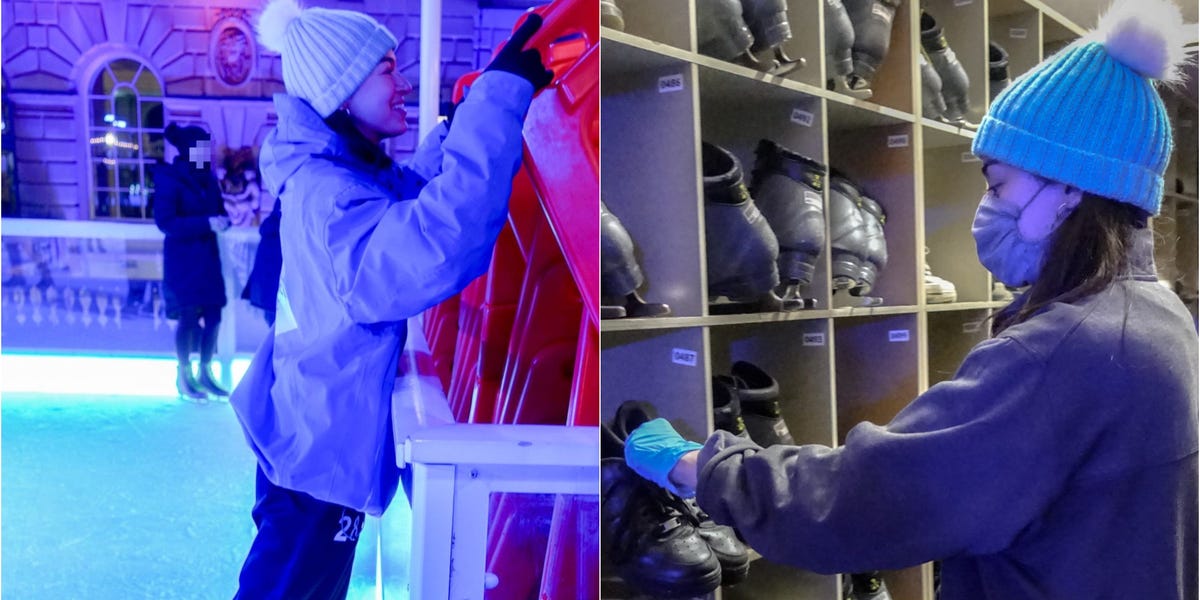 I started figure skating lessons at my local rink when I was 14 years old.

But once I progressed to private lessons with a trainer I realized my feet weren’t quite doing what I wanted them to do, my hip flexors were too tight for training. required by skating, and I was too scared to jump very high off the ice.

I started skating because I thought I would be good at it. But when I first started training I loved it because I wasn’t. It helped me cope with the pressures of school and I met a lot of good friends.

Despite all of this, I maintained a consistent training schedule for eight years, skating two to four times a week. I competed in 2008 and passed my NISA level one skating test.

But I didn’t compete beyond that. I preferred to be in the background of the Christmas pantomimes on ice, in the roles of Cinderella in 2007 and Peter Pan in 2008, where I melted into the background and just had fun.

I almost completely stopped skating when I moved to college in 2012. I tried to continue in my freshman year, but there was no rink nearby. Finally, I gave up.

I only came back for a three month stay a few years later while working for a social enterprise as an account manager which made me miserable. I hated it and tried to rekindle the escape I felt as a teenager.

But in 2017, the year after I graduated, a friend who I had skated with for years as a child encouraged me to apply to work at the large outdoor rink in central London where she was already working. for a few years.

To be selected, you must be a qualified skater available for seasonal work. When I got it, the ice first aid workout was my first skating in three years. It was exhilarating. I’m currently working on it for my fourth season.

In the application process, we were asked to upload a video of ourselves skating.

You need to have your own pair of skates and be able to skate forward, stop, and help people get up after a fall. The fact that I struggled to unhook a twin axle was not an obstacle.

The ice rink opens between November and January. The teams are either for the morning sessions or for the afternoon and evening, each lasting six to nine hours. Each session starts on time.

When we get to the rink, we choose a number that dictates the order in which we turn between being on the ice or renting skates.

Most sessions are sold out or almost sold out, so during each there are usually around 200 members of the public and five commissioners on the ice.

We skate making sure people are heading in the right direction and removing anyone who is skating dangerously. We help people take their first steps on the ice if they have never skated before. We especially help young children.

Sometimes we take on an unofficial coaching role if someone asks us how to turn or skate backwards, and we offer advice for those who want to improve their speed or stability. We can also act as physical cords in the event of an accident, liaise with the first aid team and transport people off the ice at the end of the session.

When renting skates, we have between 15 and 20 minutes to exchange the shoes of people entering for skates and vice versa for those leaving the rink. Sometimes that involves tying children’s laces and all too often helping a parent determine their child’s shoe size.

Everyone who works at the rink is solid skaters who come from many disciplines. I am one of the few figure skaters, but there are also hockey players, ice dancers, freestylers and self-taught amateurs.

Most of us are obsessed with skating. I often work evenings and see marshals who worked in the morning staying long after their shift is over to practice. Because we all share a love for a sport that many of us no longer seriously participate in, the atmosphere is fun, joyful and exciting, with a great sense of community and camaraderie.

Our salary is Living wage in London, but because shifts don’t take a full day, and there is the option of working weekends, many of us take on this role in addition to studying or other jobs.

When I started I tended to work in the morning as I was teaching Spanish after school hours. Now I work at the rink in the evenings so I can continue to freelance writing during the day. It can be exhausting, but I love it. It’s the only time I can still skate and the main time of the year I spend with my wonderful colleagues.

When I’m on the ice, I’d rather glide slowly than attempt tricky jumps that I’ve spent eight years trying to perfect.

(Editor’s Note: Lipson has asked to keep the rink where she works anonymous for privacy reasons, but Insider has verified her job.)