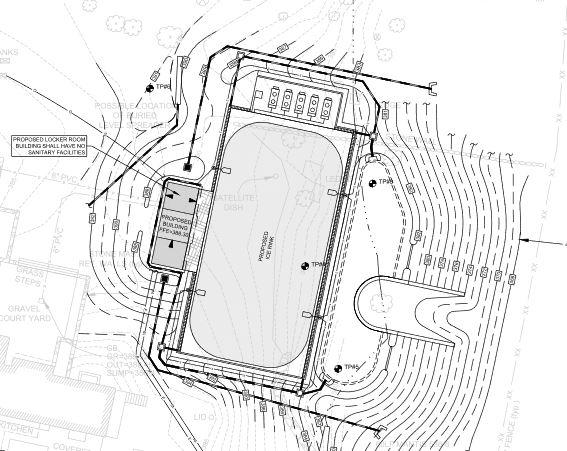 GREENWICH – The tennis courts, swimming pools and even a baseball field that adorn some of Greenwich’s private estates are about to be upgraded with the latest sports facilities: a private ice rink is coming to a backcountry house.

The Planning and Zoning Commission recently approved a request from owners Adam and Sarah Dolder to create a 100-foot-long ice rink on their property on the 400 block of Round Hill Road. The construction of a pool house and a cloakroom are also part of their project. A Zamboni, an ice-smoothing vehicle, will also be stored on site.

The special permit was required due to the volume of construction of the property, which also includes a residence. The 8,000 square foot home on the 7 acre property was built in 2018.

Bret Holzwarth, civil engineer at Redniss & Mead, land use planning experts based in Stamford, told town planning commissioners the design would aim to give the impression of a “New England style backyard,” and not an “institutional” ice rink. He noted that the property is large, with 7 acres of land, and the nearest house next door to new construction is 300 feet away. The rink lighting will be similar to that used on the tennis courts, Holzwarth said.

President Margarita Alban said the proposal did not appear likely to upset neighbors, but said limits should be applied for new construction. â€œWe want people to enjoy their property,â€ she said at a recent hearing, but the commission had to establish clear and consistent guidelines for the rink.

The backyard ice rink, while unusual, is not the first to be approved by the city. In 2008, the planning commission approved hedge fund manager Steven Cohen’s request to build an ice rink on his Crown Lane estate, a 14-acre site he bought for $ 14 million in the late 1990s. .

The commission established a set of conditions for the new rink on Round Hill Road: no organized sports teams, no professional events, family and friends only, no music or amplified sound system, and no light after 22 hours.

The commission approved the proposal and requested that the architectural review committee work with the owners on the lighting. There was no public comment during the meeting on the application, which also required approval of the site plan.

While tennis courts, basketball courts, and large swimming pools are common sporting features on large Greenwich properties, there are also driving ranges, horse paddock and in a recent case, a softball field, used on private residential properties. The Planning and Zoning Commission imposed a series of conditions on a softball field on Clapboard Ridge Road, which had been built without the necessary permits.

The tradition of large-scale recreational facilities goes back a long way in Greenwich.

An antique carousel was approved for William Berkley’s residence on Doubling Road in 2005. A performing arts amphitheater for 500 spectators was built in Cos Cob by a patron in love with Shakespeare. It operated in the 1960s after it was built in the early 1930s.

In Stamford, a house built on Studio Road an indoor ice rink in 2004.

A message seeking Adam Dolder’s opinion on the rink project was not returned this week.

The city administration had considered allowing the operation of a temporary ice rink at Greenwich Commons, off Greenwich Avenue, late last year. But he declined the proposal due to public safety concerns due to the coronavirus pandemic.