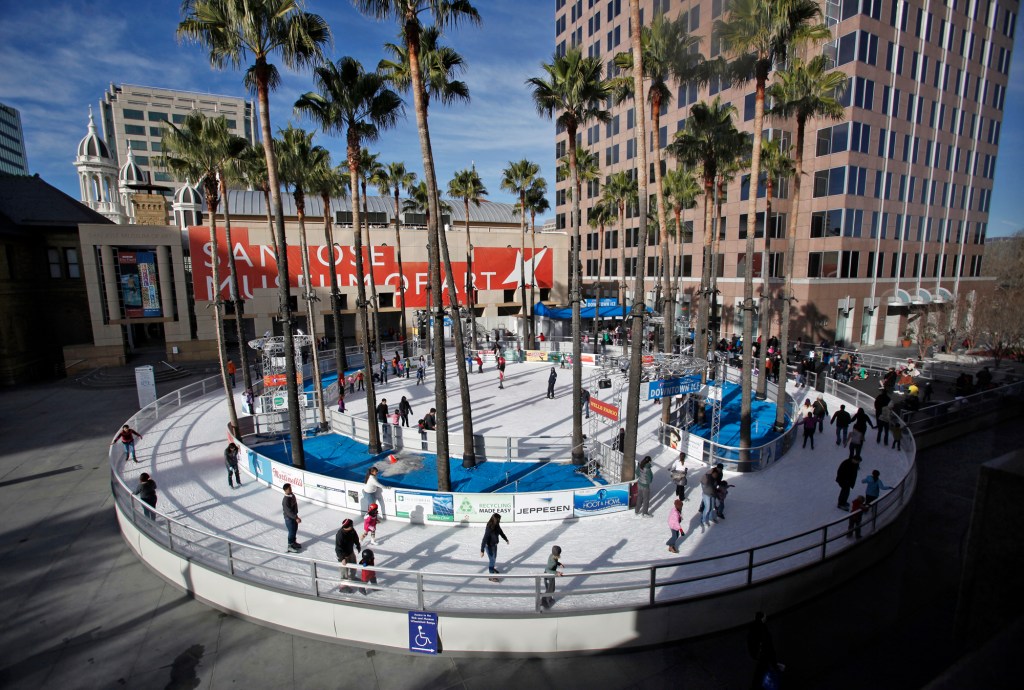 One of San Jose’s most popular holiday events is melting down.

You can cross ice skating off your list at Kristi Yamaguchi’s Downtown Ice, at least for this year. But all is not lost for the great family fun of the end of the year: Aloha Downtown Roller Rink will take its place at the Circle of Palms.

No doubt the loss of the ice rink, First reported by NBC Bay Area’s Robert Handa, will be a bummer for those who can’t wait to lace up their ice skates and glide among the palm trees. But as Scott Knies, outgoing CEO of the San Jose Downtown Association noted, times and tastes are changing.

When Downtown Ice is the first opened in 1995, just three years after Hayward-born Yamaguchi won Olympic gold, the Sharks had just started playing hockey in the new arena, and ice skating was new to the Bay Area. “As we have done many times before with Music in the Park, America Festival, SoFA Street Fair and now the Ice Rink – events must constantly be redesigned to stay relevant,” Knies said.

Roller skating is hot again, enjoying a resurgence in popularity it hasn’t seen since the 70s. Even the famous Rockefeller Center ice rink in New York was transformed into Pinball’s Roller Boogie Palace for six months this year, drawing a VIP crowd for opening night, including Mary J. Blige, Dr. Dre and Usher.

Liz Ruiz, a former member of the Silicon Valley Roller Girls roller derby team which operates the Aloha Fun Center in Eastridge, said roller skating has grown in popularity during the pandemic as people seek outdoor activities air, and she is honored to bring Aloha downtown. “I used to skate recreationally in the Circle of Palms area and always thought it would be a great place for a skating rink,” she said.

The Aloha Rink, which opens Nov. 19 and runs through Jan. 8 at the Circle of Palms, will be characteristic a holiday theme but could also come back in spring or summer. The Downtown Association has not ruled out bringing an ice rink back to Circle of Palms in the upcoming winter seasons.

The design of the inner and outer rings around 32 palm trees – illuminated by LED lighting – will be similar to the ice rink. There will be a DJ station, two rest areas for the skaters and a fun retro design for this “roller disco” theme. The cost should be around $20 per person, including skate rentals, but exact times, prices and special events are pending city permit approval.

The San Jose Downtown Association opened Downtown Ice in 1995 at Market and San Carlos streets, where the Marriott San Jose hotel is now located. Starting in 2000, it spent a few seasons at Market and Balbach streets — now home to the blue-and-white-striped pavilion of the San Jose McEnery Convention Center — but went on hiatus for at least a season before moving in 2004 to the Circle of palms.

Through his Always Dream foundation, Yamaguchi, who won figure skating gold in 1992 in France, had been the rink’s title sponsor since 2010. In 2016, the rink recorded its 500,000th skater and attendance of the season has often hovered around 50,000 in recent years.

The rink closed during the 2020-21 season amid the COVID-19 pandemic. Last year, a new operator — Willy Bietak Productions — began to manage it, introducing hourly sessions, Silent Skate Parties and Musical Mondays. But Bietak chose not to return this year, leaving little time to find a new rink operator and opening the door to something different.

“Bietak gave it his all last year as the premier rink producer,” Knies said. But challenges – including a week-long rainstorm between Christmas and New Year – kept customers away during what would normally be the busiest week of the season. COVID-19 concerns also erupted late in the year, and the closure of the then-Fairmont hotel (now reopened as Signia by Hilton) dampened the usual holiday energy.

San Jose Councilman Raul Peralez, whose district includes downtown, was among those disappointed to learn the rink would not be returning this season. “Personally, I was looking forward to putting my son on the ice for the first time this year,” he said.

Now he just has to have it trimmed for roller skates.