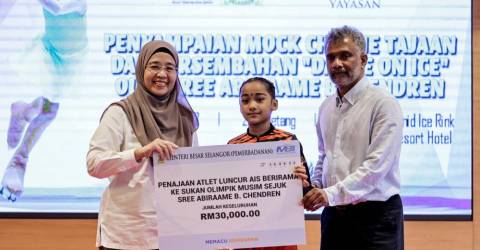 The 10-year-old will move to Gimhae, a city in South Gyeongsang Province and where the club is located, as an early preparation to qualify for the 2028 Winter Youth Olympics and the Olympics in winter of 2030.

“I’m ready to train hard even if the training sessions there last six hours. I’m used to it,” she said when meeting Bernama at the Sunway Resort here today.

His father, B. Chendren, said Sree would leave for South Korea on Oct. 1 to begin his intensive training.

“This is phase four of Sree’s preparations for the world stage which requires six hours of daily high-intensity training, six times a week.

“Training in Malaysia lasts a maximum of two hours and we don’t have full facilities like there. We will also have a technical coach during training there (in South Korea) and he will analyze Sree’s performances from time to time,” he said.

Earlier, Sree received a sponsorship worth RM30,000 from Menteri Besar Selangor Incorporated (MBI Selangor) and also a contribution of RM60,000 from Yayasan Sime Darby to fund the cost of training there. down.-Bernama