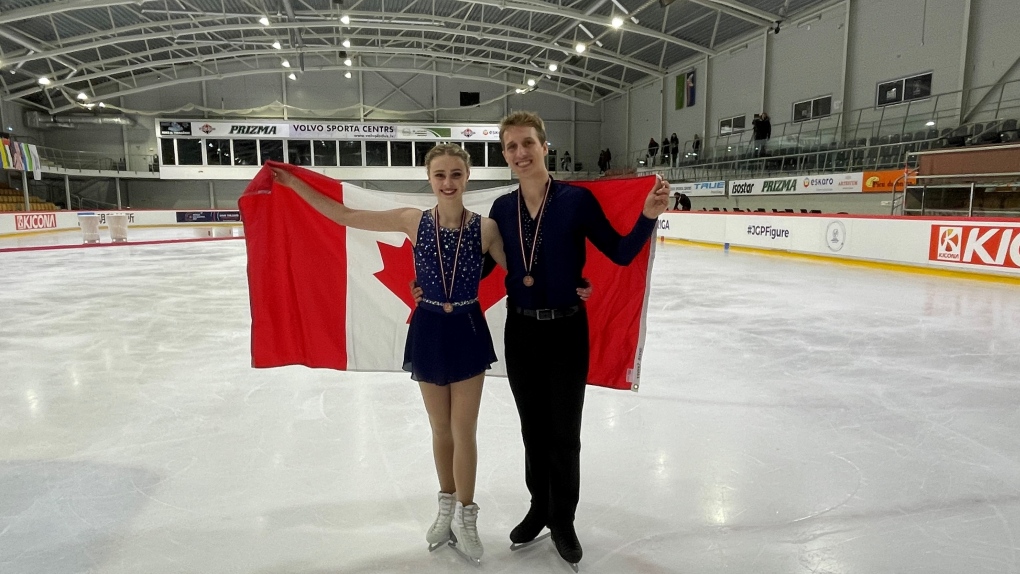 “This is our first season on the international circuit. It was just awesome, even though it wasn’t the skate we wanted—it was awesome to come back to Canada with a medal,” Taylor said.

“It was super exciting, even though we didn’t have the skate we wanted, it was still a really good experience,” Schmitz said.

Schmitz, 16, of Shellbrook, Saskatchewan. and Taylor, 20, of Regina, began their careers as a couple in 2018. They both train five days a week while adding weekend workouts, off-ice training and competitions.

Both skaters also compete in singles events throughout the skating season under the guidance of their coaches, David Schultz, Vicki Schultz and Garrett Gosselin.

The two qualified to compete for Canada at their first Junior Grand Prix in Riga, Latvia, which took place earlier this month.

“A Junior Grand Prix is ​​like a separate cycle of events for international level skaters. They come together and it works in conjunction with the senior Grand Prix circuit. So those are our hopes for the World Championships and the Olympics. These athletes are just below,” Schultz explained.

The two finished behind Canadian teammates Ava Rae Kemp and Yohnathan Elizarov, who won silver in the junior sculls event.

“The camaraderie within the Canadian team was tremendous. Everyone goes to all of our events. You become friends with these people and also see their first experiences at these competitions and it’s fun to watch,” Taylor said.

Even though they are both trying to make it in their careers as solo skaters, they enjoy the bond that comes with competing as a duo.

“We get along really well. Things are always super easy with each other and we kind of understand each other. It just blends really well,” Taylor said.

“I like his calmness when we go out and compete. He’s calm and I’m not,” laughed Schmitz.

Now the pair will prepare for their next Junior Grand Prix in Poland in October, followed by Skate Canada Challenge later in the year and then Nationals in hopes of qualifying to compete for Canada at the World Championships in Calgary. .