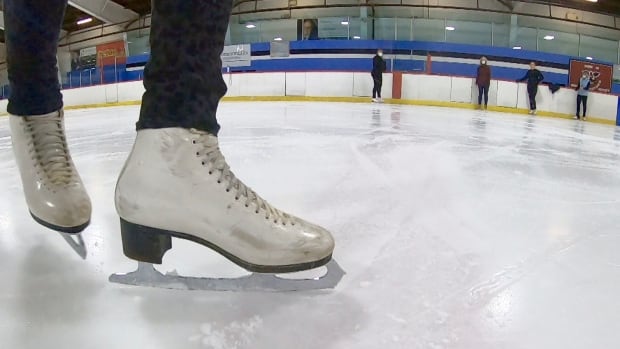 Lindsay Goodridge fell in love with skating when she was two years old. At age nine, she moved hours away from her home to Ontario to pursue a career as a competitive ice dancer.

It was his whole life – until it wasn’t.

“I was 18 when I stopped skating,” Goodridge said.

“I passed all my gold level tests, did one last cycle of competition, went to the provincials one last time and then hung up the skates.”

I think everyone loves skating and they just want to do it again.—Martha Murnaghan, Skate Again

It’s a similar story for Ashton Dougan of O’Leary who once skated up to seven days a week and competed in the Maritimes.

“It was a big part of me growing up and it was really hard just to let go. You almost feel a little guilty letting go of a sport you’ve put so much time into,” she said. .

“A skater’s career kind of ends at the college stage. There aren’t really many programs after that.”

‘It was just wonderful’

But inside the Simmons Sports Center in Charlottetown, a program is changing that by giving former figure skaters the chance to practice.

“I think everyone loves skating and they just want to do it again,” said Skate Again coach Martha Murnaghan.

“There may be a lot of adults who want to skate, but the challenge is finding the right ice time.”

The athletes range in age from around 20 to 60, she said. Sessions are one hour long and begin with a half hour group lesson followed by free time to work on the skills you choose.

“It’s just wonderful to be able to skate again. To be able to get back on the ice, but to skate for me this time is really awesome,” said Goodridge.

“It’s crazy that muscle memory coming back to you – they really say it’s like riding a bike and it really is.”

Although Goodridge’s definition of riding a bicycle is a little different from most, his involves a double axle and a camel spin, twirling around at fantastic speed.

“It’s very different from skating on an outdoor rink, so without it I probably wouldn’t have the same opportunity,” she said.

Dougan was busy on the ice doing edge work and flexibility exercises.

“Certainly some of it comes back,” she said.

“Trying to do double jumps and spins, that would be difficult. I don’t know if my muscle memory would allow me to do that at this point, but maybe I’ll get there soon.”

As the skaters eagerly return to the ice, ready to try the tricks they performed growing up, Murnaghan is quick to remind them that their bodies may not be as flexible as they once were. .

“You just have to be careful because like I always tell people, the speed is good but the technique isn’t there like it used to be nor the agility,” Murnaghan said.

“No one ever really wants to fall but falls happen and it’s always a risk, especially the older you get you have to be more careful.”

Hopes for the future

As the season draws to a close, Murnaghan and his skaters are keeping their fingers crossed that the Skate Again program will be offered in the future.

“It’s just great to have the opportunity to keep skating – really it is,” Dougan said.

“Things don’t stop at 12th grade or first year of college, even though it’s a recreational sport, you still have the opportunity to do it and participate in Île-du- Prince Edward”