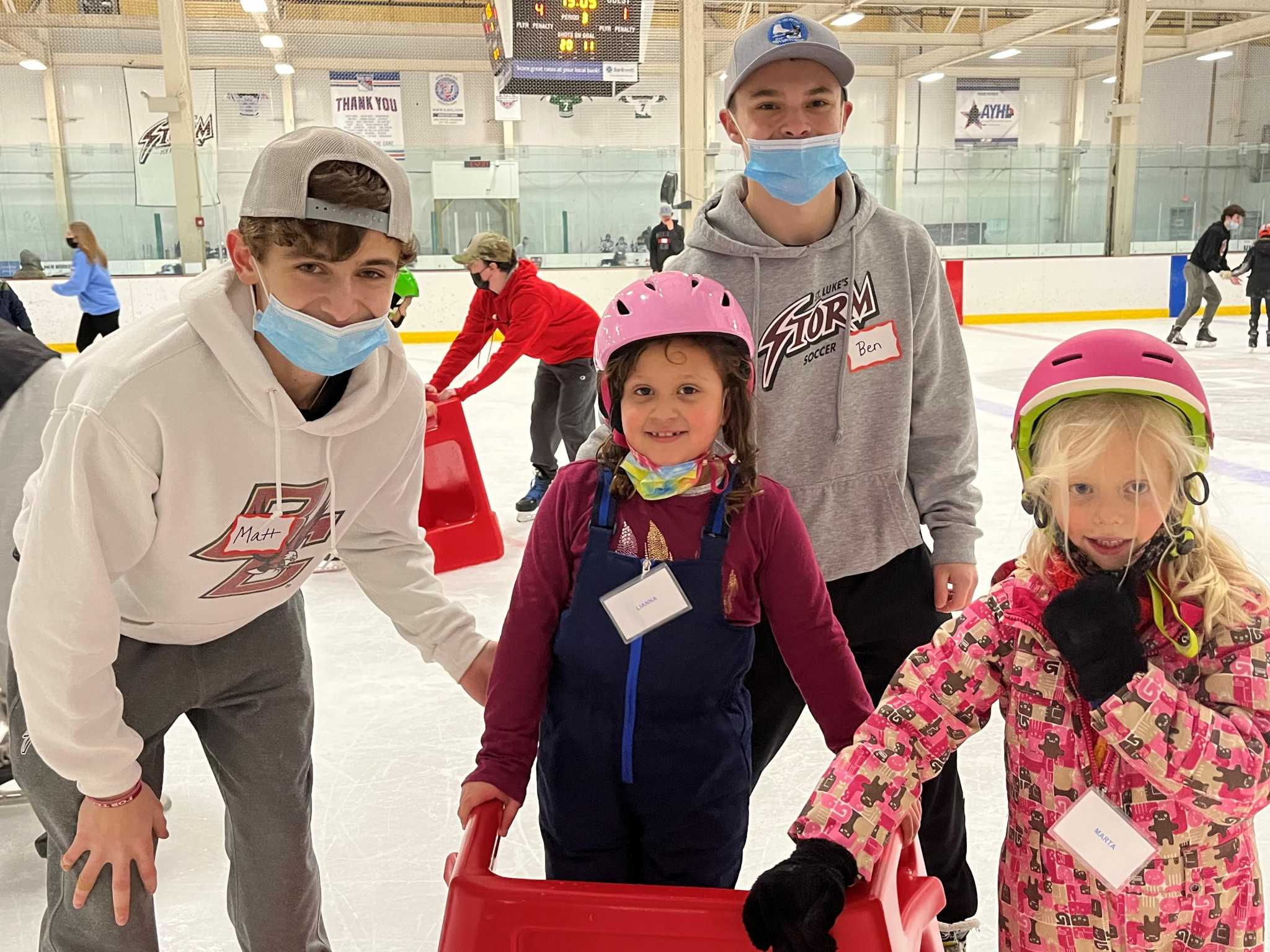 NORWALK — At the SoNo Ice House last weekend, some kids took to skating like they grew up on the ice. Others needed the help of a skating coach and a teenage mentor. A child crawled on the ice until he was comfortable enough to stand.

Regardless of their approach to first-time ice skating, it was an opportunity not always available to children from underserved families. Emily Kelting hopes to change that with her new program, Ice Skating for Everyone.

“My hope for the future of ice skating for all is to introduce more children who otherwise wouldn’t have the opportunity to learn to skate to experience the joy of having wings under their feet,” said Kelting, a Norwalk resident who founded the program in 2019.

Kelting, who is a former professional figure skater, first approached Horizons at New Canaan Country School about participating in the program because of her past volunteer work with the organization. The group serves 400 disadvantaged children and young people in Norwalk and Stamford.

Seven children in grades three and four participated in the pilot program in 2019 at the Darien Ice House. Kelting recruited local figure skating professionals and friends from hockey leagues to volunteer their time to teach the kids how to skate, as well as high school hockey players to serve as mentors for the teens.

The program ceased operations during the pandemic but was able to restart last Saturday at the SoNo Ice House with 17 new Horizons skaters, all between the ages of 5 and 7. Each skater was equipped with a pair of skates and a helmet collected from an equipment drive led by Ice Skating for Everyone board members Tracey Riccardi and Kari Pinkernell.

“I’m surprised how well they’ve done considering everything we’ve been through for the past two years. I’m really impressed with how they’ve managed to acclimate,” said Pinkernell, a local skating instructor who first volunteered her time in 2019. “There was no fear of getting out there- low, which was quite different from the last round. … Maybe it’s a function of kids wanting to do things again that makes them excited to get on the ice.

Pinkernell saw the “profound impact” the program had on his son Taylor, who served as a teenage mentor during the pilot run and made him want to get more involved. She joined the board and her youngest son Chase became a teen mentor this year, recruiting some of her friends from the New Canaan High School hockey team, as well as other involved teens. in local hockey and skating programs.

“I thought it was a pretty cool experience today, seeing these kids who don’t have access to hockey. … Some of these kids could skate faster than other kids on my team. It’s crazy. They got it so quickly,” said 16-year-old Chase Pinkernell, who is one of 21 teen skating mentors. “We’re all giving back to the community for these kids, it’s great to see.”

Ben Ansaldi, 17, who plays hockey for St. Luke’s School, was introduced to universal ice skating through his teammates and first served as a mentor in 2019. He believes all children have the right to play sports, not only for the physical activity, but the social skills they acquire by being part of a team.

“It’s a lot of fun and it teaches you a lot of things like you always have to pick yourself up, keep trying and eventually get better and better,” Roeder said.

Enrolling young skaters in the program is Nehemie Moïse, Horizons’ Director of Student and Family Support, who also got involved in 2019. In addition to her work with Horizons children, Moïse will work with teens volunteers to teach them how best to communicate with their young mentees.

“Teenagers need to realize that it’s a reciprocal relationship, with teens learning as much from younger skaters as skaters learn from their older skating mentors. Because it’s true – many teenage volunteers in the pilot program said the experience changed their lives and changed their attitudes,” Kelting said.

Ice Skating for All will hold its first four sessions at the SoNo Ice House thanks to the arena’s donation of ice time. The final six weeks will be spent at the Darien Ice House in March and April. Kelting is also talking with Stamford Twin Rinks about hosting a session in the fall.

The goal is to expand Ice Skating for All to more rinks and more organizations that work with youth in underserved communities. Kelting would also like to see the model established for the skating program in Fairfield County to create new ice skating chapters for everyone in major cities across the United States.

What is a quad in ice skating? Kamila Valieva’s historic jumps at the Beijing Olympics – NBC New York