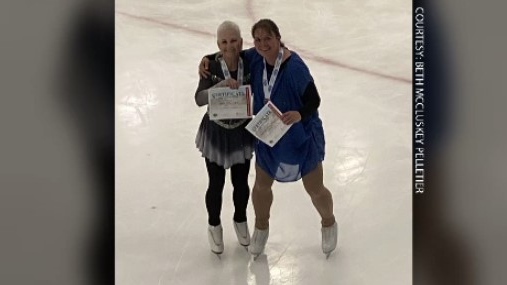 Gaye Cail and Beth McCluskey-Pelletier figure skated as children, but their skates now have a second life as adults.

“I did figure skating as a kid from nine to about 14, and when I turned 60, I decided it was time for me,” Cail said. I needed to do something for myself and once back on the ice, I absolutely loved it.

Last month, they laced up their skates in Ottawa to compete in the ISU International Adult Figure Skating Competition.

“We didn’t know what to expect. We were a little nervous coming from little New Brunswick,” Cail said. “We had no idea, but once we got there it was amazing. ice by practicing our programs.

“When you’re younger, you compete against these other skaters and, you have to beat them, you have to do better than them,” said McCluskey-Pelletier. “But it’s not like that there. there for each other, they encourage everyone.

They spend between eight and ten hours on the ice each week and it has become a bit of a family affair.

“My husband is super proud, and I skate with my granddaughter and we really appreciate that, she’s a great skater,” Cail said.

“Both of my daughters have been in figure skating, one of them still does – she’s a beautiful figure skater,” McCluskey-Pelletier said. “But she wants me to spend my time.”

Both skaters say it’s important to do things for yourself.

“Just do it, try to take some time for yourself and find that one thing that brings happiness and that’s it,” McCluskey-Pelletier said.

“Even as you get older, you still have to have your mobility and mindset,” Cail said. “Figure skating does all of that for us, you have to think and focus on what you are doing on the ice.

“So I think anyone getting into the sport is a very good thing – or any sport!”

Both skaters hope to compete in the ISU Adult International competition next year in Nashville.