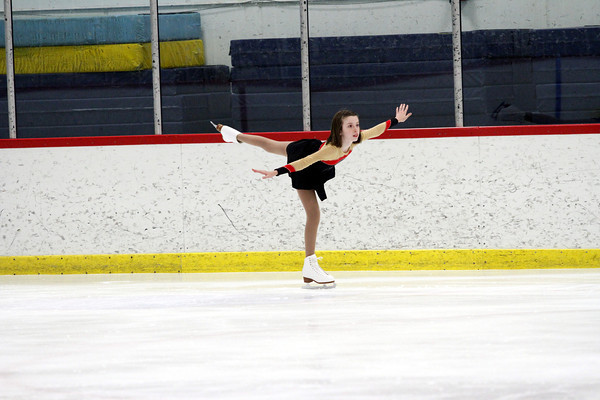 Jewell Mason, a student at MCCC, has always found a second home on the ice at Taylor SportsPlex.

When she was 3, an ice skating scene appeared on Mickey Mouse, Mason said. It was then that she told her mother that she wanted

“I skated very consistently over the next 15 years,” Mason said.

Mason said she went from classes where she learned the basics to private one-on-one lessons so she could compete in solo competitions.

In all of her hours on the ice, the most rewarding experiences are when she is individually skating, working on a hard jump, spin or move, Mason said. When she finally lands, she still hears praise from all of her fellow skaters who have watched her progress for many years.

Although solo skating is a category where she has been very successful, she said she discovered synchronized skating teams at the age of 8 and it has been a high priority in her training.

“It’s a great way for people to get involved in skating while still being able to compete as adults and have the support of their teammates,” said Wright.

Mason had to cut back on skating a few years ago because she suffered a knee injury resulting in extended recovery, but that didn’t stop her, Mason said. With the support of her teammates for recovery, she plans to continue skating her entire life.

Mason is the youngest member of the team of skaters aged 18 to over 50, said Megan Brown, another skater.

Each brings their unique talents and weaknesses, and they help each other, said Jenny Gibson, Evolution coach.

Mason would like to bring skating to the MCCC.

“I was hoping to create what we call a collegiate team, which is a collegiate level team to represent the MCCC at competitions like other colleges do like Michigan State, University of Michigan, and Adrian College,” Mason said. .

Mason said she did not know the skating community at MCCC, but would like to recruit.

“You don’t have to have synchronized skating experience, you just need to know how to skate,” said Brown.

Every Sunday evening, the synchronized skating team performs its routine and trains in both on and off ice training.

“We promoted because we’re having a lot of fun, but we like to be very competitive,” Wright said.

Even with a full academic load, Mason said she takes time for the activity she enjoys the most.

“Skating is a real comfort to me,” said Mason. “It’s very relaxing for me, even under the most stressful circumstances. I plan to skate for the rest of my life.

Mason said she thinks every skater should try synchronized skating. Contact her at [email protected] for information.