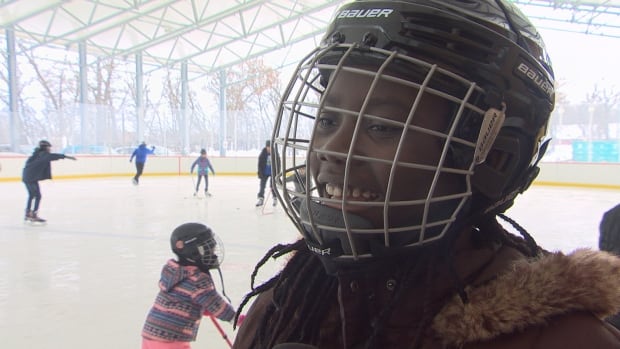 Dozens of newcomers of all ages braved the cold Saturday to get a skating lesson from someone who knows his way around an ice rink – Winnipeg Jets defenseman Josh Morrissey.

Morrissey skated with the new Canadians at Camp Manitou in Headingley, just past the Winnipeg perimeter, as part of the True North Youth Foundation’s â€œWelcome to Winnipegâ€ program.

The program, now in its third year, offers newcomers to Canada the chance to experience winter sports, often for the first time, at the outdoor rink at Camp Manitou.

This included Adhel Kuac, 12, who grew up in Egypt, and said she wasn’t worried about the cold on Saturday – with temperatures hovering around -20, and the wind chill making it feel even colder – too much.

“It’s very hot in Egypt. You don’t feel the cold, and in Canada, [there are] things you have never known and seen before, â€she said.

“You can try different things.”

“It’s cold but it’s fun,” said Salma Arounia, 10, who left Venezuela for Winnipeg a year ago.

Saturday wasn’t her first time skating, but she said she was learning a lot more.

But for many others, Saturday was the first outing on an ice rink.

Albertine Malonda, 11, and her 13-year-old brother Timothy said it was their first time skating.

“I really don’t know if I like it. I’m still falling!” said Timothy laughing.

Morrissey says the event is not just about learning new skills, but also making connections.

â€œIt’s a fun day. You meet some really cool people and welcome them to Canada, â€said the Jets defenseman, who was on the program for the second time.

â€œObviously an outdoor rink at -20 is a really good welcome in Winnipeg,â€ he said, adding that he himself had learned to skate on an outdoor rink – but it had been a long time since he started to skate. hadn’t skated outside in such cold weather.

Morrissey, who grew up in Calgary, said hockey has helped him form many friendships and added that he hopes it can do the same for the kids he skated with on Saturday.

â€œIt would be really cool to see maybe one of these kids playing in the NHL one day, but I think just the fact that they’re playing sports in a team atmosphere is a good thing.

About 40 families who have been in Canada for less than a year participated in Saturday’s event, with the help of the Manitoba Immigrant and Refugee Community Organization (IRCOM).

The True North Youth Foundation says 240 new Canadians will have the chance to try a variety of winter sports as part of the program over the coming weeks.

Most of the participating families are from Somalia, Sudan, Syria, Eritrea and Ethiopia.

“Some of them are trying out skates for the first time,” said Rick Bochinski, Camp Manitou manager.

“So for me, who’s been skating since I was three or four, it’s super exciting to see adults pushing the red chairs and trying to skate for the first time.”

Bochinski said all participants will also get a ticket to an upcoming Winnipeg Jets game for the full hockey experience.