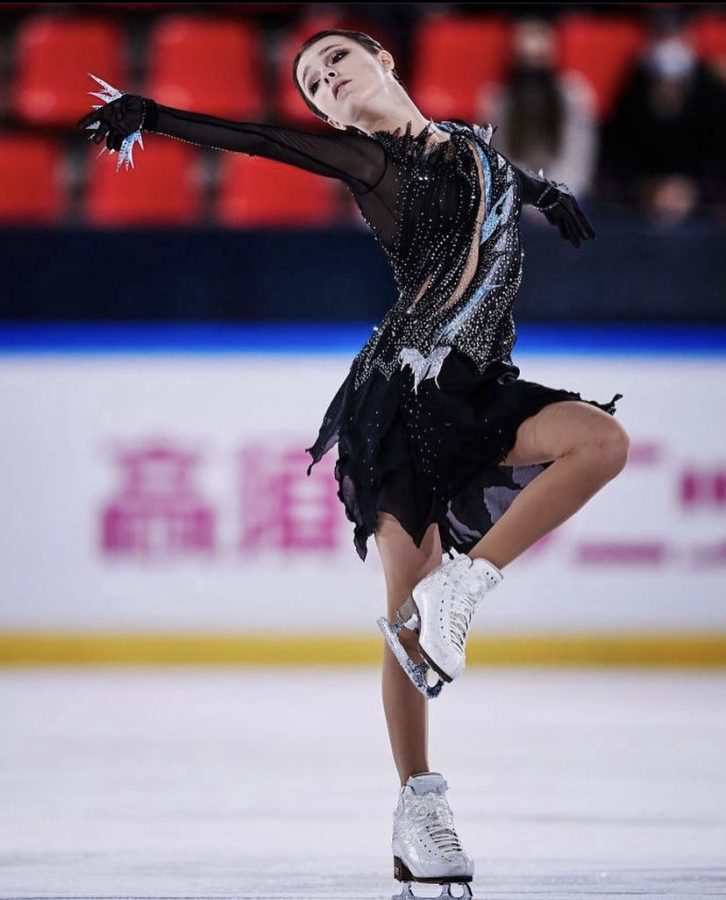 I am enchanted by ice skating. I patiently wait for every Winter Olympics when in reality I am only interested in watching this unique event.

Specifically, I love watching the women’s individual solo skating. I don’t know if it’s the costumes or how the athletes manage to project a sense of simplicity in the act, but I find it really captivating.

I seriously can’t begin to understand the sport. I know how to skate, but I don’t understand how it works; it’s so amazing to me.

Accompanying the graceful movements, we see the costumes elevate to unparalleled glitz and glamour. The shimmering arrangements of fabrics and gemstones covering the skaters draw me in; they definitely draw me to the sport.

These outfits are truly ornate works of art. In no other sport do I find the clothes so breathtaking, but I can’t help but ask a question: aren’t they freezing?

Specifically this Olympic season, one costume particularly stands out: Karen Chen’s costume in women’s solo skating. While yes, Chen’s attire was breathtaking, it’s not so much the look that makes her so memorable.

Skating to “Butterfly Lovers’ Concerto,” the song was accompanied by a striking, handmade, purple illusion V-neckline. The designer? None other than his mother herself.

Speaking of her costume, Chen had nothing but an outpouring of adoration for her mother. “She does all the hard work,” Chen said. “And she puts blood, sweat and tears into it.”

The color is powerful. Covered in ombre, the color that seeps through as you pull down the dress is a perfect way to avoid the 2017 look that an ombre might have. Purple, the color of royalty, holds a certain ability. She looks royal.

Covered in ombre, the color that seeps through as you pull down the dress is a perfect way to avoid the 2017 look that an ombre might have.

Crystals surrounded hints of the deep V-neckline. The light-catching gemstones make the costume look not only designer but also expensive. It must have required meticulous attention to detail. This outfit is everything. Hsiu-Hui Tseng, you hit t

Alexandra Trusova’s outfit – at first glance – looked rather bland unlike many other gold pieces I was expecting to find. However, watching his performance, I was not overwhelmed.

Trusova has fiery red hair. While skating, his face remains rather rigid; however, this does absolutely nothing to hinder his unrivaled talent.

Paired with her red hair and red lipstick, her black dress just worked. With a simple neckline and a mesh side bodice, it looked sophisticated. In turn, the slits in the lower part of the costume were part of the choreography. Her outfit worked like a glove, moving with her and adapting perfectly to her routine. Trusova ended up winning the silver medal.

To get into some of my favorite looks featured at this year’s Olympics, Wakaba Higuchi’s short program costume looked absolutely stunning. At first glance, I only recognized the featured ice tones, however, the pastels covered the chiffon base. There is an illusion that it is a shoulder, and the whole side is transparent, appearing to be made of snowflakes and ice. I love this dress, really unreal.

Young You wore an equally stunning ensemble. I don’t know why, but I will always favor cool colors. This gray board with blue crystals on the torso and arms was amazing – I seriously can’t even. I especially love the open back and sheer aspects of this costume.

Anna Shcherbakova’s short program costume from the ROC – oh my.

Olympic gold medalist Anna Shcherbakova wore a black and gray long-sleeved piece that I love. He has pieces of sheer fabric and sparkles sticking out from the top of his wrist as well as around the neckline. I really think I would still go for the long sleeve. So incredibly breathtaking. This costume matched his performance, worthy of a gold medal.

Believe me, I could go on and on.

I have seriously been able to admire these wonderful sets for ages. By studying them, I was, in a way, able to live out my childhood dream – and in young adult life – of dancing or skating in these costumes. In a way, this exquisite painting allowed me to realize part of this fantasy.