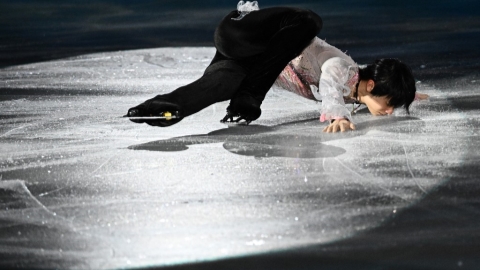 Yuzuru Hanyu of Japan competes in the Figure Skating Exhibition Gala during the Beijing 2022 Winter Olympics at the Capital Indoor Stadium in Beijing on Sunday.

Japanese superstar Yuzuru Hanyu was at his best on the Olympic ice for what may be the last time, as he joined the Beijing Games’ top figure skaters at the exhibition gala.

Inside the Capital Indoor Stadium, the crowd went wild – outside, fans lined up with Winnie the Pooh toys, waiting to catch a glimpse of their hero, even in a full bear costume.

Despite his disappointing fourth place finish in Beijing, two-time Olympic champion Hanyu inspires passionate devotion in fans around the world, who often toss stuffed animals of the cartoon character onto the ice in reference to a box of tissues he carries with him on the rink.

“I received 20,000 letters and messages from Chinese fans,” he said earlier this week. “I’m so happy to be Yuzuru Hanyu. I’m so lucky.”

“Emotionally, of course, yes, I would love to skate in the Olympics again,” he said after the men’s competition.

But at 27, these Games could be his last.

After weeks of intense compensation overshadowed by a doping scandal involving 15-year-old Russian prodigy Kamila Valieva, the gala was a chance to skate without pressure – and have fun.

The ice rink has been transformed, the austere white lights of the competition giving way to multicolored projections on the ice and the ceiling.

Van Gogh’s “Starry Night” formed the backdrop for Canadian ice dancers Piper Gilles and Paul Poirier as they swirled across its surface.

Madison Hubbell and Zachary Donohue of the United States, in their final Olympics together, gave an intensely emotional skate to “Once I Was Loved” as the spotlight followed them down the ice.

Georgian Morisi Kvitelashvili set a very different tone, portraying himself as the genius from the Disney movie “Aladdin,” complete with blue body paint, a lamp, and the dance move “The Worm.”

Spaniards Adrian Diaz and Olivia Smart brought back the 80s with a comedy routine accompanied by leopard print and fluorescent spandex on “Maniac” from the movie “Flashdance”.

“It’s the perfect time to explore and be free,” Diaz said of the exhibit.

Freedom featured music from Britney Spears, Roy Orbison and a “Rocky” style boxing fight from Italian pair Nicole Della Monica and Matteo Guarise, who started the performance by screaming from the bleachers, before ripping off his shirt and to skate bare-chested.

Russian Alexandra Trusova, who had been devastated to only take silver in the women’s event, gave a defiant skate in a Wonder Woman costume, her long pigtails flying as she landed her difficult jumps. 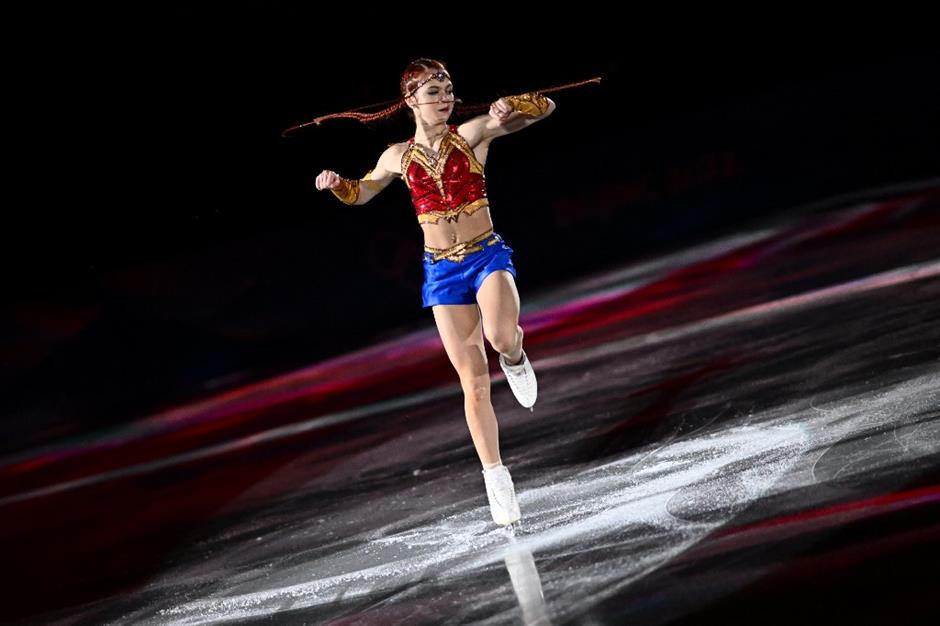 Her teammate Anna Shcherbakova, who beat her to the gold, also had a trick in her angel costume, which lit up halfway through her “Ave Maria” routine. 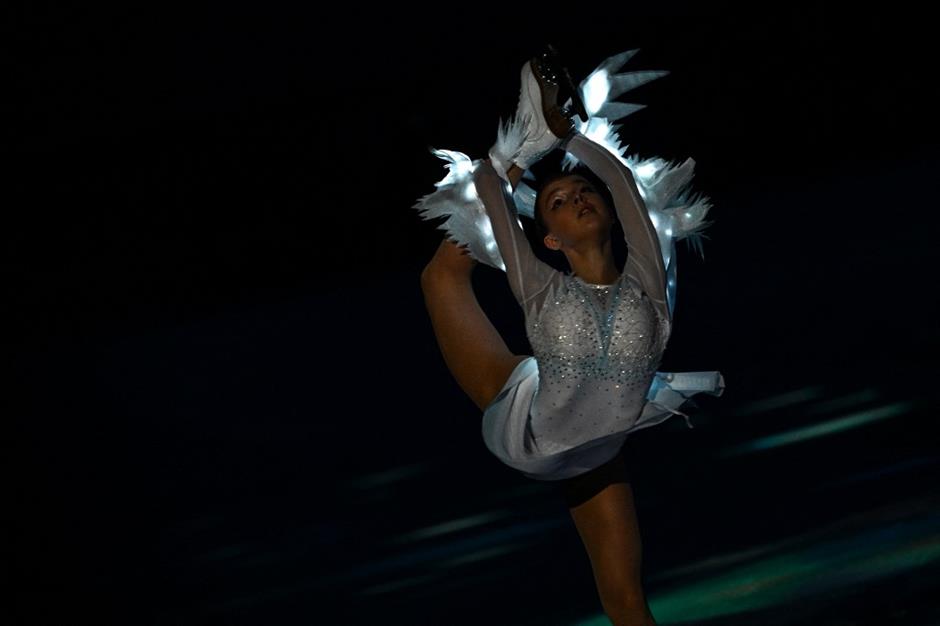 Chinese ice dancers Wang Shiyue and Liu Xinyu enlivened local audiences with patriotic rock music overlooking the Great Wall, with the audience waving their phone lights to the beat of the song “I Love You China”. 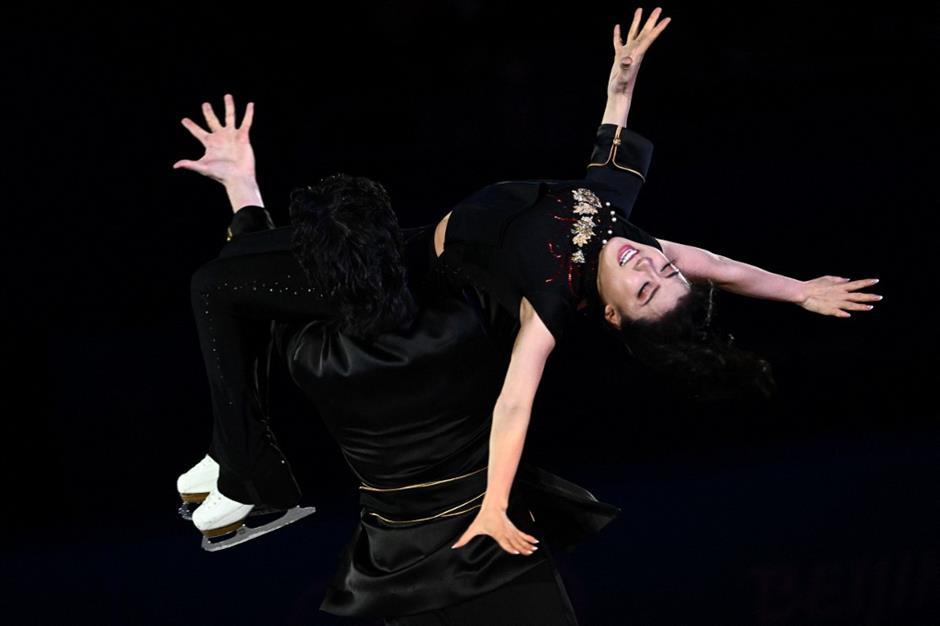 At the end, all the skaters formed a huge circle on the ice.

No one seemed to be having more fun than Hanyu. 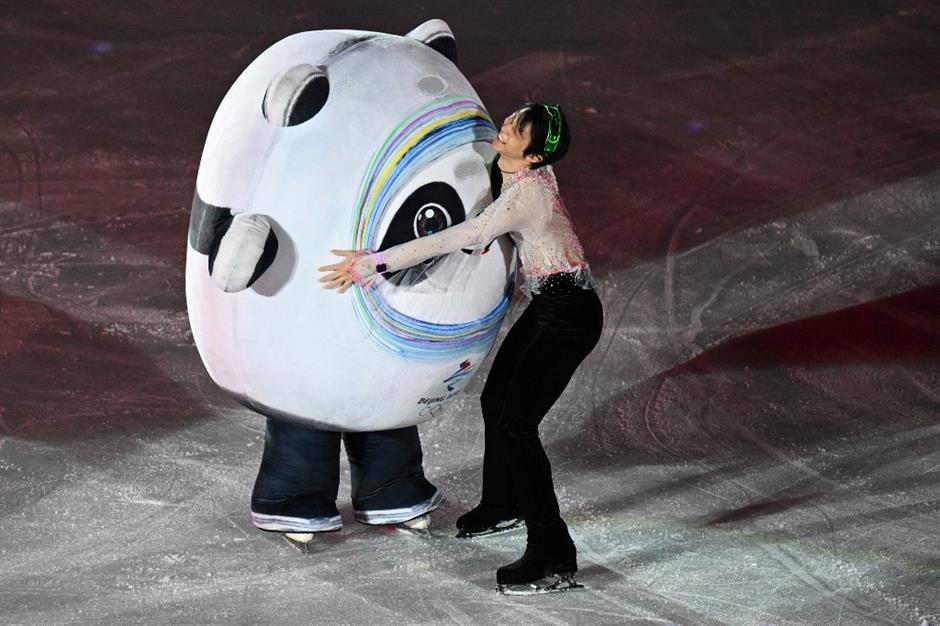 He danced and hugged Bing Dwen Dwen, the Games’ wildly popular panda mascot, and was picked up and spun by China’s Liu to the cheers of the crowd.

Japan’s ‘Ice Prince’ was one of the last to leave the rink, bowing to enthusiastic applause.

Minimum figure skater age of 17 should be considered: source