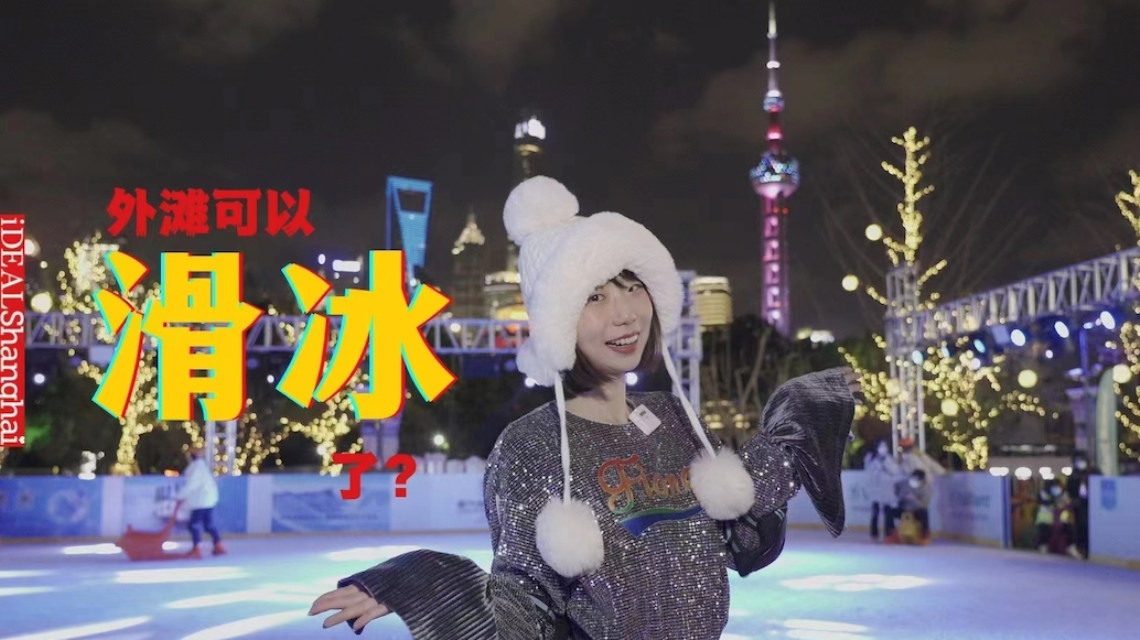 Skating in the snow can almost never be experienced naturally in the city, but it comes close to real life at the North Bund during the Shanghai International Ice Festival.

The location is the city’s largest outdoor skating rink which reopened in December 2021 at Sinar Mas Plaza, also known as White Magnolia Plaza.

The background scene of the ice rink is the skyline of Lujiazui.

With the countdown on to the Beijing Winter Olympics, the ice rink has suddenly become a must-see attraction.

With 1,200 square meters of ice you can slide, jump and fall on, the rink itself is a winter highlight in the city.

It might not be as perfect as the indoor skating option, but the outdoor experience and views are second to none, especially at night when the Lujiazui skyline is illuminated.

How to get involved in outdoor skating even as a beginner? I checked it on January 6th.

First, basic skating gear such as skates and protective gear are included in the ticket, so you don’t need to bring them.

Inside an easy-to-find bubble tent next to the rink, you’ll find benches and lockers to access skating equipment. The staff will help you choose the right ice skates and guide you to put on the protections which are really useful for beginners. Walkers and instructors are also available on site.

It was my first time skating on real ice and it was hard to stand on the skates. 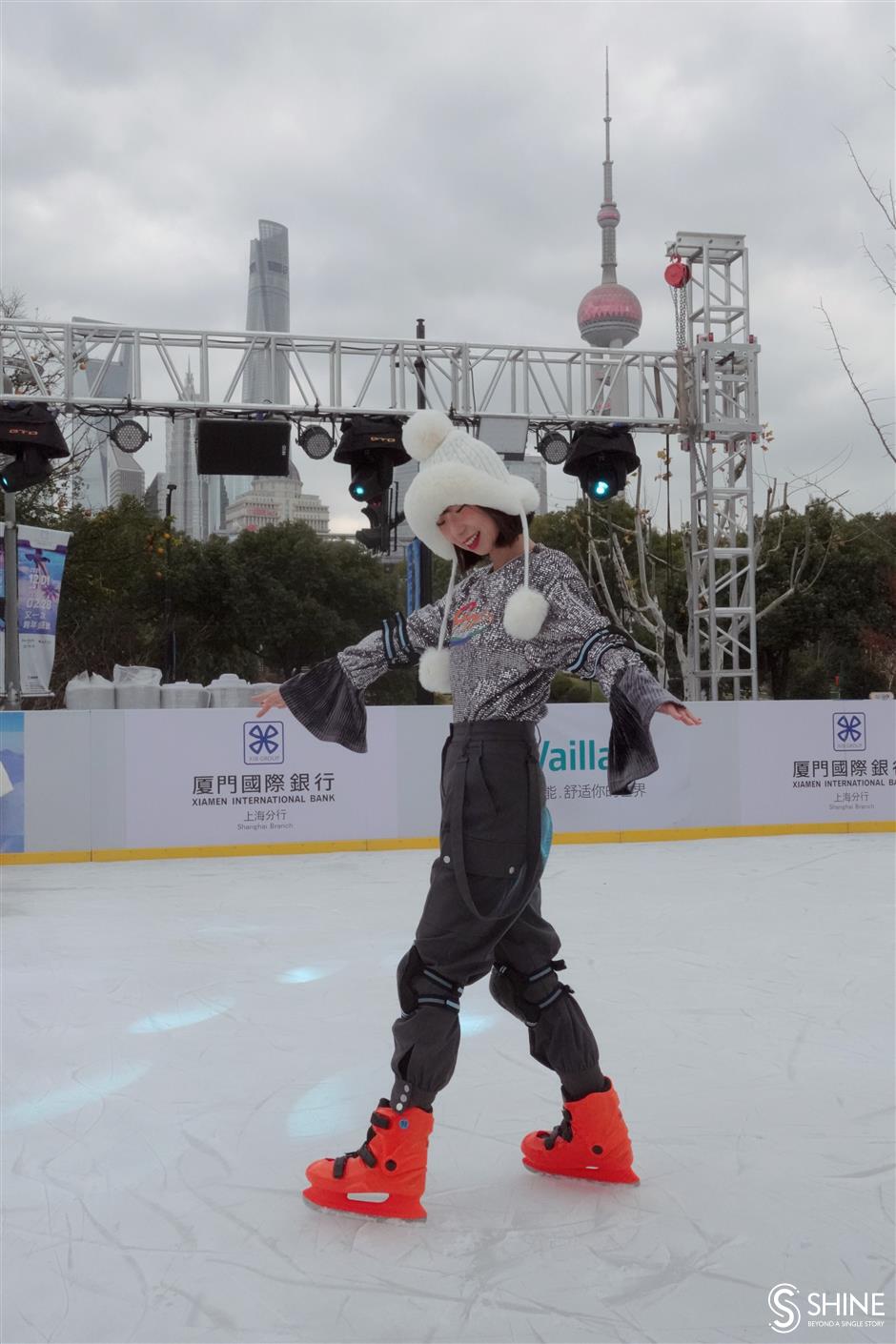 Fiona Li skates gracefully, even at the beginner level. 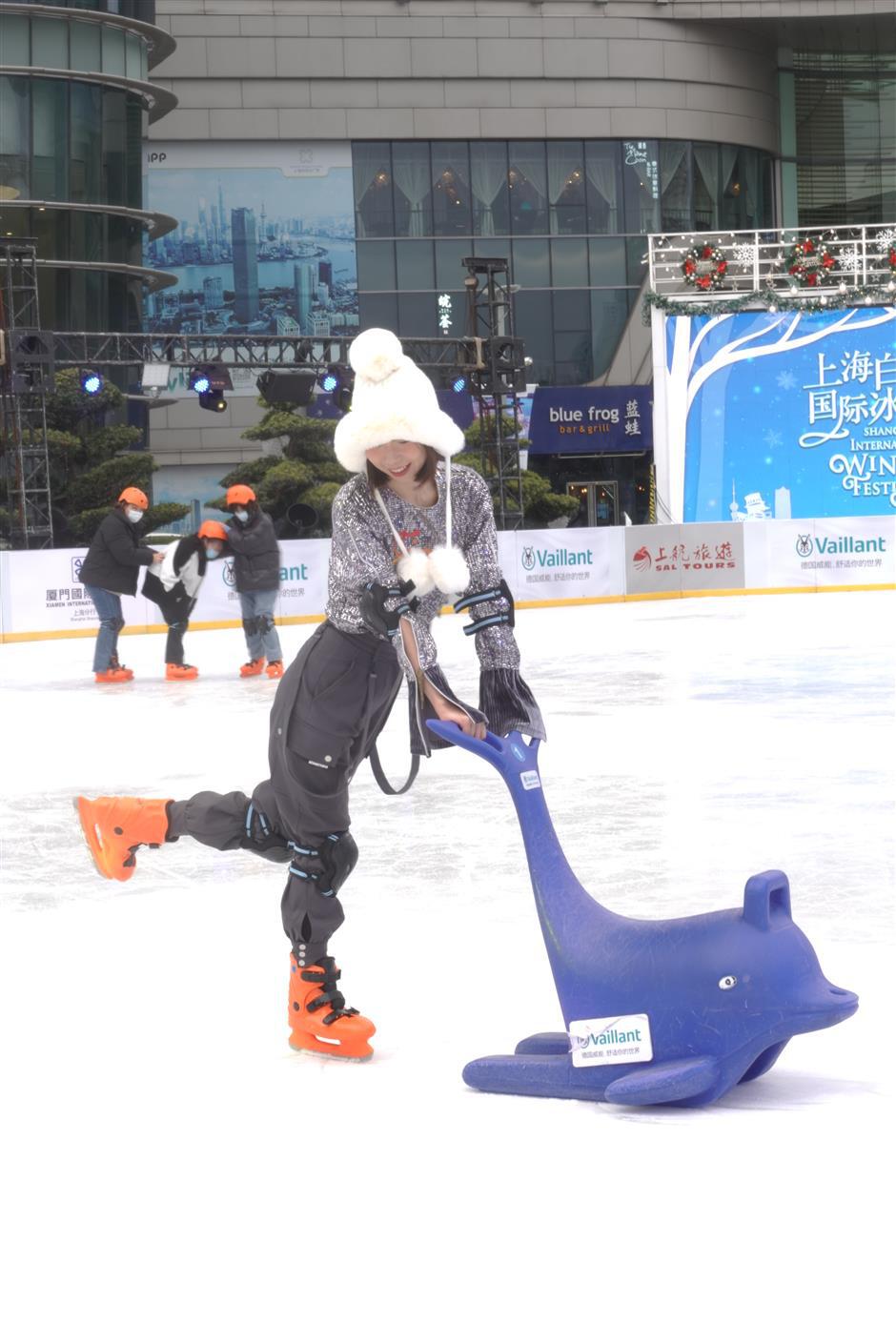 You can also rent a cute dolphin-shaped walker (50 yuan/7.84 USD) that allows a child to sit on it.

“Be careful when you first step onto the ice, hold the railing, get used to the feeling of wearing skates,” said my instructor Yang Sen.

“Then try to bend your knees, stay low if you don’t want to fall, that really helps. It becomes a lot easier to keep your balance.”

But falling is always easier the first time than slipping, just like the kids around me.

The skates they provide are recreational skates, made of plastic, and the edge of the blade is not sharp. So they won’t hurt you when you fall, do figure skating jumps or acrobatic moves.

Yang gave me some tips for sliding forward – the easiest way is to wobble like a penguin, but the best way is to push your skates sideways.

“The skates shouldn’t be too close or too far apart. It’s best to keep one skate a little in front of the other. Don’t forget your arms, they can save you from falling many times,” he said. . “Almost every beginner can perform their first glide after half an hour of practice.”

I finally got used to the skates after falling dozens of times. And I found that there was nobody good for that here. You will have many accidents with your skater friends and you will always have fun.

You can also rent a cute dolphin-shaped walker (50 yuan/7.84 USD) that allows a child to sit on it.

As a helpful tip, if it’s your first time skating, you better start at 9am or 3pm right after the staff have cleared the ice. And due to the hot weather, the ice surface will not be perfect for skating in the early afternoon from noon to 3 p.m.

Compared to indoor rinks, the outdoor one is cold, wet and with uneven surface.

At the same time, whether you’re a wobbly first-timer or can slide in trick figure eights, there are few things more exciting than lacing up your skates and gliding across the ice outdoors, especially in Shanghai. , a city where it rarely snows.

The Oriental Pearl TV Tower and the entire Lujiazui skyline are illuminated at 6 p.m., transforming the ice rink into a winter wonderland enveloped in splendid music and light.

Sinar Mas Square sparkles as the unique lights fall on the skaters.

The snow gun is working, the kids are excited to have a snowball fight and the girls are busy taking snapshots and videos for their social media feeds.

It reminded me of northern China which becomes a world of ice and snow every winter.

This is the third opportunity for the reopening of the huge North Bund ice rink. Its interactive light shows and ice shows will debut at the upcoming Spring Festival.

The interactive screen will be operational during the winter vacation period (from January 14), allowing skaters to follow their movements on the screen and offering games for children. 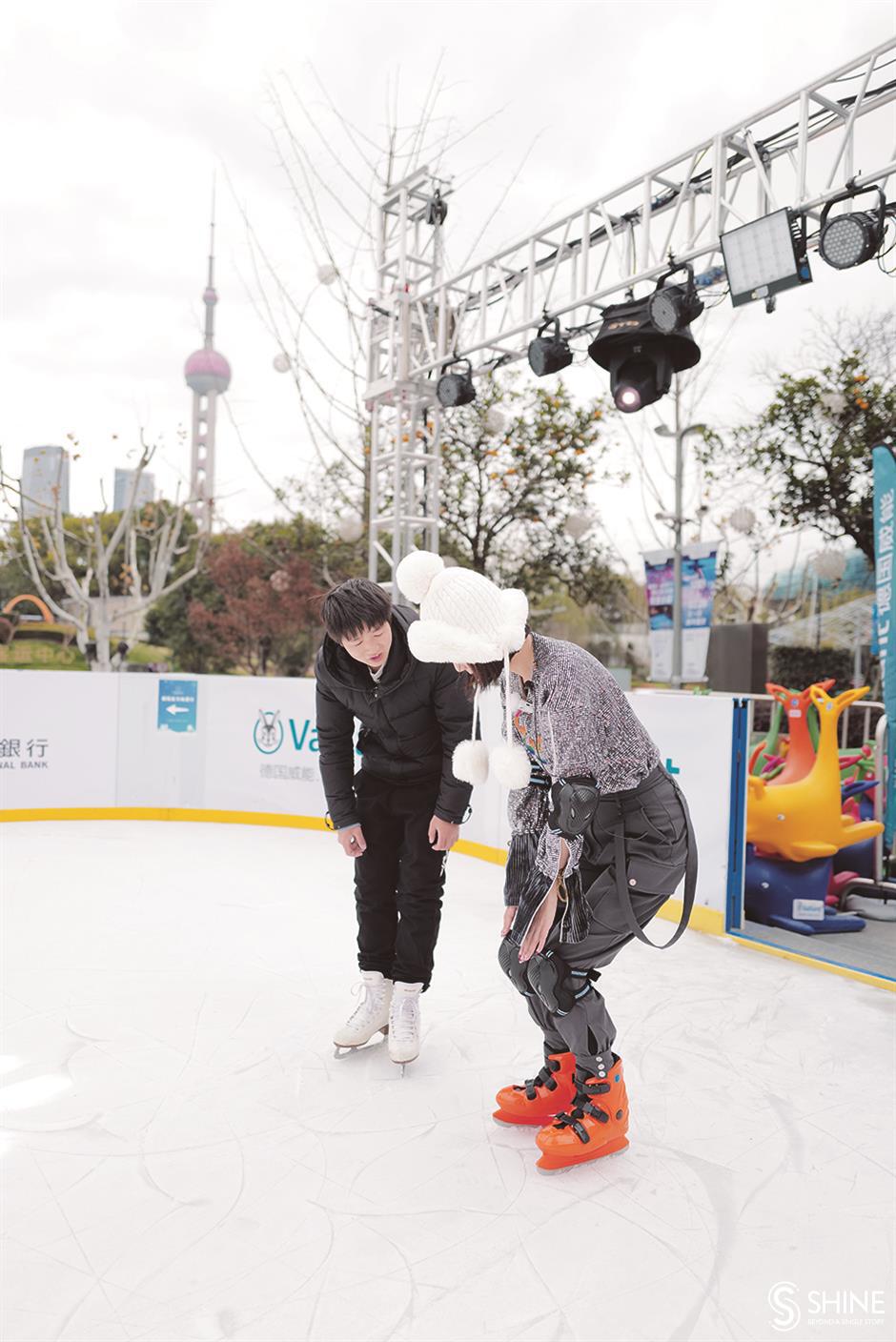 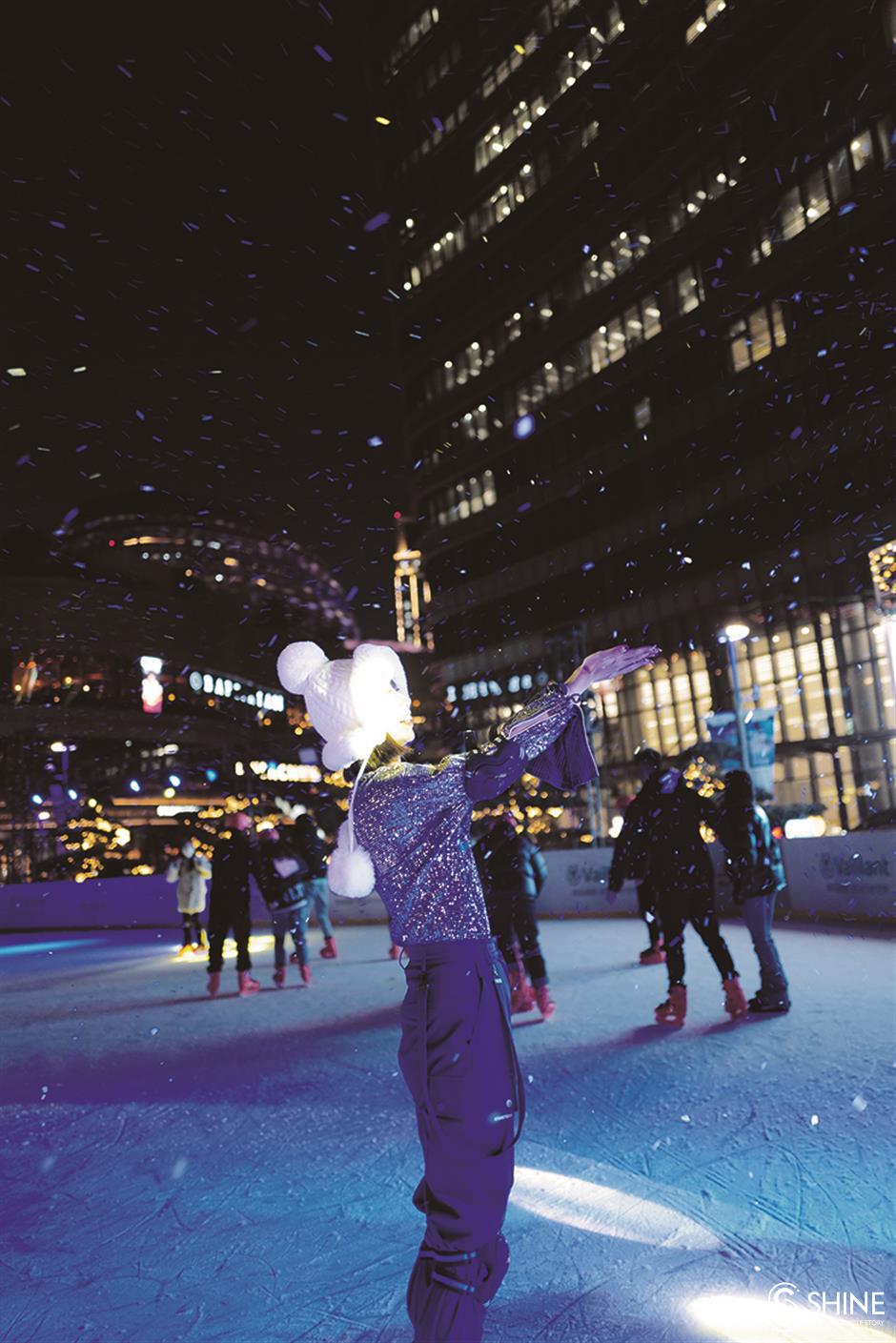 A great winter view when it snows at the ice rink

Good to know before you go:

The rink will be open until February 28, and hours and prices vary, with each session lasting 90 minutes.

Tickets include the rental of skates and protective equipment but, due to safety regulations, children under 4 years old, seniors over 65 years old and children under 1.1m tall are not eligible. not allowed to participate.