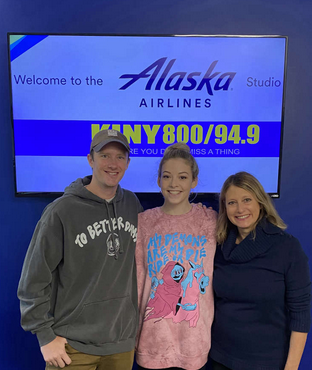 Gold said what their plans are in Juneau.

“We are so excited to be here in Juneau. We were here in the spring, and now to have the opportunity to come back and work with a new group of kids. Our mission is to teach Juneau how to skate. you were going to become a figure skater, you just have to learn how to fall and get up correctly, have fun in open skates or play hockey.”

Gold said they would start with the basics and work their way up.

“Kids, I mean, I’m a big fanatic for the basics. I mean, like when you’re building a house, the foundation is key, so when you start throwing bigger stuff like a triple sow, a triple lutz, a triple toe loop, triple axel, it just makes everything so much easier So we kind of start with the skating skills and then we progress into the spins and jumps and just trying to get the kids as much knowledge as possible. I can’t make you triple sow, but I can help give you the tools to know one.”

Abbott spoke about his background in figure skating.

“I grew up in Colorado and my background is pretty atypical for most athletes. I moved when I was 14 to train, which is not abnormal, but I had a kind of fulfillment later in my career. I’m 20. And that’s when most figure skaters hit their peak. And after that, I won four US titles and went to two Olympics, after a lot of hard work, blood, sweat and tears.

“I started when I was eight, so a little older than some kids start. And in 2014 I went to the Olympics in Sochi, and as you said, a huge honor to represent the United States in the Olympics and being part of a rather elite group Figure skating may be an obscure sport but I really think there are so many places outside of the Olympics that it can take you Fortunately, Jeremy and I, through hard work and a bit of luck, were able to make the Olympic team.”

“Gracie has this road to gold camp. And they traveled it in the United States and two of our figure skaters had the chance to attend the camp that was held in the spring in Anchorage. And we have thought what an opportunity to bring them back to Juneau for our figure skaters so we asked them and here they are.

“The perfect opportunity for everyone to get on the ice with Olympians and look forward to getting on the ice themselves and learning more. Our classes actually start September 12th. This Monday we have classes from 6:45pm to 7:45pm For all basic skills from very, very beginners all the way up to higher levels We’ve brought back our best program It’s called Snowplow Sam, if you go to registration you’ll see it and we have it on Monday nights In addition to our traditional Saturday mornings And so it starts a week from Saturday September 17th Saturday at 9:45 a.m. basic skills snow plow Sat, Sat We have a club special adult coffee at 11 a.m. And it’s for all the grown-ups out there who want to learn to skate, hang out, and learn some fun skills.”

Should I take out a personal loan? 3 things to consider