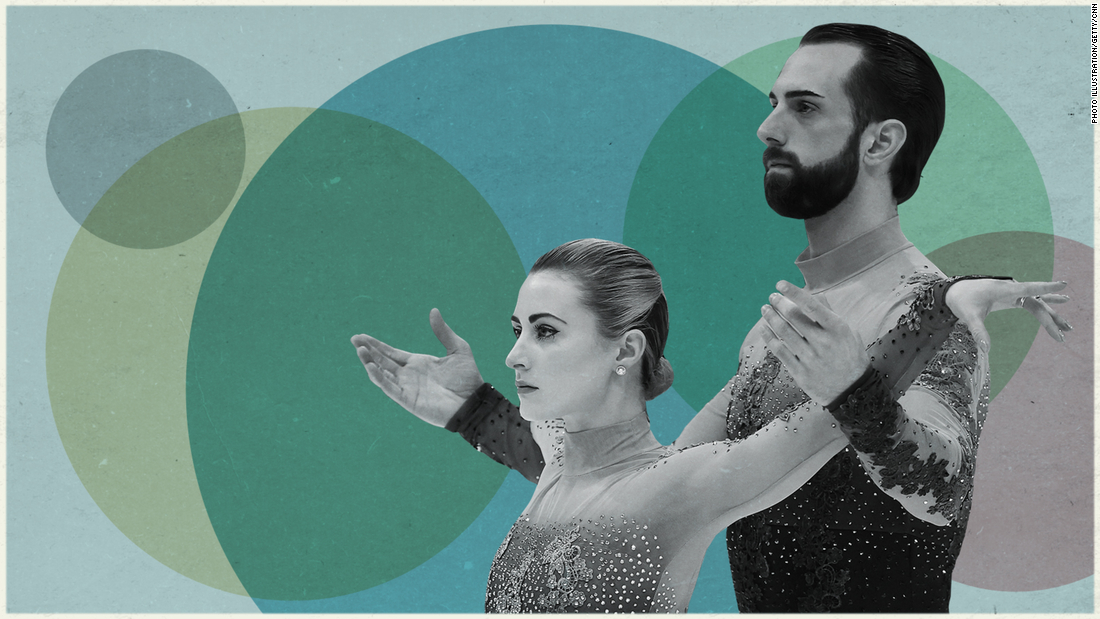 Ashley Cain-Gribble and Timothy LeDuc: How American figure skaters forged their own path in a sport where stereotypes run deep

“Dad makes jokes and puns, mostly,” is what LeDec quips as the key to the duo’s success. “And a lot of hard work…we can work really hard and push ourselves beyond what we knew was possible.”

The American duo say their bond off the ice influences their performance, propelling them to new heights in their skating careers.

After winning their second national title last month, Cain-Gribble and LeDuc are now preparing to compete in their first Winter Olympics in Beijing.

It will be a defining moment regardless of their performance in the pairs events with LeDuc, who identifies as gay, set to become the first non-binary athlete to compete in the Winter Olympics, according to Team USA.

For the duo, who have been competing together since 2016 and who have both taken breaks from competitive pair skating, the build-up to the Games has been a chance to reflect on their own journey.

Often, they say, they have found themselves at odds with the standards and expectations of skating during their careers.

“For a long time, Timothy and I didn’t see each other represented, and so we didn’t quite feel like we belonged,” Cain-Gribble said. CNN Sports.

“And for a long time, people had things to say about us. Even when we teamed up, they had a lot to say about my body, or Timothy’s sexuality. People will always make those comments.”

Cain-Gribble, who is five-foot-six and taller than most women competing in pair skating, said previously talked about how body shaming almost forced her to retire from the sport.

She adds, “I think for us it’s about leading with authenticity, being ourselves, and creating a very inclusive environment.”

Cultivating this environment has meant doing things their own way, including when it comes to their costumes. The pair wear similar colors and patterns, while Cain-Gribble often competes in a long-sleeved leotard, rather than a dress.

According to Erica Rand, author of “Red Nails, Black Skates.”

“They do a lot of the same moves, similar things: throwing jumps, lifts, side-to-side jumps together,” Rand told CNN Sport.

“I also see a lot of emphasis on hard skating work. You also see in other skaters it’s not a single thing, but just the emphasis on pairing work in their spirals – which is the term for skating arabesques – – and just a feeling of tremendous power.”

Cain-Gribble and LeDuc chose not to portray romantic stories with their programs, as is often the case in pair figure skating.

“The girl is very fragile, or she’s kind of the flower, the man comes to save the woman, or it’s a romantic Romeo and Juliet story that’s told a lot,” LeDuc told CNN Sport.

“There’s nothing inherently wrong with these stories, but often they’re centralized and seen as the only narratives you can portray, the only story worth being a champion or succeeding at.

“Ashley and I are just different that way; we’ve never had a romantic history and we’ve never been a romantic couple. We’ve always been about equals and shown two incredible athletes coming together to create something beautiful.”

En route to winning their national title in Nashville, Tennessee, last month, Cain-Gribble and LeDuc broke the previous American record in the short program with 79.39 points before wrapping up the title with 145.84 points in the freestyle.

It helped them qualify for Beijing 2022 alongside Alexa Knierim and Brandon Frazier, the 2021 American champions who missed this year’s competition after Frazier contracted Covid-19.

But long before their masterful performance at the Nationals, Cain-Gribble and LeDuc – who are coached by the former’s parents, Peter and Darlene Cain, and Nina Mozer – each had doubts about their career prospects.

LeDuc quit professional skating for two years in 2014 and spent time working on a cruise ship, while Cain-Gribble – whose father was a professional figure skater and represented Australia at the Winter Olympics from 1980 – says she was ready to retire from skating before switching from singles to duets with LeDuc in 2016.

The chance to skate in the Olympics is a happy twist in their up-and-down skating journeys, as well as the culmination of their long-held ambitions.

“I started dreaming of the Olympics as soon as I saw them…I fell in love with this incredible blend of art and athleticism, and I knew I had to be a part of it,” said LeDuc.

“Being an Olympian, whether we were on this team or not, is about striving for excellence and chasing a dream,” they add, “and it’s something that Ashley and I have worked for for many years. years.”

When it comes to being America’s first non-binary athlete at the Winter Olympics, LeDuc hopes to use the platform to empower other athletes: “I hope…people watching us can feel like they can lead with authenticity, that they don’t feel pressured to change things about themselves in order to achieve success in sport and pursue their dreams.

“Ashley and I had to chart our own paths to find our success. And we did that by being authentically ourselves and leading with what makes us different and unique.

“I hope that’s where the narrative is centered around and not necessarily around me.”

Authenticity is at the heart of the duo’s skating philosophy, but it’s something that can be hard to find in a sport so steeped in tradition, explains Rand, an arts and visual culture teacher and in Gender and Sexuality Studies at Bates College.

“It wasn’t until July 2021 that the International Skating Union changed the category of female skaters from what was officially called ‘ladies’ to now called ‘women’,” says Rand.

“To me, it really shows you how traditional this sport is because the idea that women are meant to be women is reflected in things like costume expectations, makeup, etc.”

Cain-Gribble and LeDuc, however, bucked some of these trends.

“Ashley Cain-Gribble isn’t your typical female pair skater…One of the reasons they both attract each other is that she’s not the typical skater characterized or dubbed a ‘little pair girl’ “And it’s neither small nor extremely small,” says Rand.

Now, with a chance to showcase their authentic style on the Olympic stage, Cain-Gribble and LeDuc look to savor every moment in Beijing.

“That’s kind of what we’re looking for in every competition this season – just to get the most out of the experience,” LeDuc said.

“We want to feel like when we leave that ice, we’ve given it our all.”