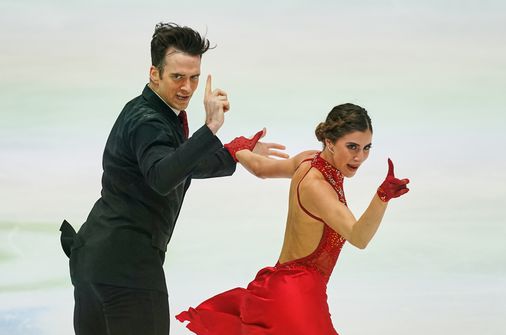 Armenian figure skaters have been deprived of their participation in the world championships due to a false COVID test. What can we do about it?

Here is our leading couple: Tina Garabedian and Simon Proulx-SÃ©nÃ©cal. These are Armenian figure skaters who hoped to represent their country at the 2022 Beijing Winter Olympics, but found themselves deprived of their participation at the World Championships in March due to erroneous and late COVID-19 testing. And while theirs may be an isolated case, as they continue to fight to rectify a glaring and heartbreaking mistake over which they had absolutely no control, their fight should be noted by Olympians around the world, including those who are going to Tokyo for the next Summer Games. . What happened to them is a red glow in all Olympic sports, where much needed COVID protocols have the flip side of disaster.

What if the test is wrong? What if no one seems to care?

In the spirit of screenwriting, a little exposure.

Tina, 24, and Simon, 29, have been partners on the ice since 2015, training together in Montreal, where they live. They left for the Worlds after getting all the necessary negative tests, finally ready to unveil their beloved â€œMamma Miaâ€ ice dance routine after countless months of pandemic inaction. They remained in the bubble assigned to the International Skating Union, working, eating and associating only with themselves and with their team, going back and forth only between their rooms and the rink. They continued to follow testing protocols, including four days after their arrival, which was on a Thursday.

Then, Friday at 6:40 am, the first day of competition, their ordeal began.

It was then that Simon was informed, just hours before the duo’s scheduled practice at 7:50 a.m. and 1:00 p.m. for their World Competition Group, that he had tested positive for COVID. The saga would officially end with a text message at 12:54 p.m. confirming a second positive test, one that eliminated any chance of getting on the ice. They were there, left to watch, isolated from each other, as a television robot announced to the world that they had withdrawn from the competition for health reasons. They had never conceded anything like that.

The hindsight only made the day worse. The day was marked by a complete lack of communication and the absence of any documentation or evidence other than text messages presented to the skaters or their coaches, and ended with exclusion from the competition. The aftermath continues to tell a much bigger story, including irreparable damage to humans at its center.

Because here’s the highlight: Subsequent tests not only proved that Simon was never positive, but also showed that his second test was negative, despite what he was told.

The International Skating Union has opened an investigation, but the couple have yet to hear of a resolution.

“There are so many unanswered questions,” Lisa Lazarus, their lawyer, told The Globe. After spending a decade working for the NFL in grievance arbitration cases (with the Patriots among his teams), Lazarus, a partner at Morgan Sports Law, now specializes in protecting athlete rights in sports litigation. â€œIt’s so hard to say now what happened, but it is clear that some confusion in the records, and not a very good or not established procedure to follow, has led to this.

â€œI think there were no minimum systems in place. We cannot allow COVID, although it is of course such an important public health issue, to infringe an athlete’s rights. “

â€œWe don’t know who to blame and we don’t know how this whole thing happened,â€ said Simon, speaking with The Globe alongside Tina and Lazarus on a recent Zoom call. â€œWe feel helpless in a way because we were victims, we couldn’t do anything, talk to no one, we were isolated. We let things happen to us. Like watching a movie, it happens to you in the face and you have no power.

â€œThe goal of an athlete is to do their job and the fact that COVID is a factor, of course things should be done with this new thing in mind, but there also has to be a process in place that will prevent things like that to happen, â€Tina said. â€œTake a test two days before, just in case, or do some faster testing, other options that would have prevented this from happening to us. I hope other Olympic organizations and committees take this seriously and I hope this will be fixed for everyone in the future.

Time is running out for the duo, who have another opportunity during the last Olympic qualification in September in Germany. But with scores and training that put them in contention for the Olympic qualifying criteria ahead of Stockholm, it’s so hard to let go of the disappointment. Tina wasn’t exaggerating when she said “I felt like my life was over”, nor Simon when she said: “We will never get back what was stolen from us.”

The theft also resonates locally, where a deep and thriving Armenian community would seize the chance to root the pair in Beijing. With Massachusetts ranking second behind California nationally among the states with the largest Armenian population, and with the small nation of the former Soviet Union recently attacked in a war led by neighboring Azerbaijan, the chance to seize something so exhilarating is precious.

This is how Herman Purutyan, who is the President of the State of Massachusetts in the Armenian Assembly of America, put it: â€œThe Armenian nation is not in a very good position. Having said that, things like this where you are looking for a good sign, something to bring people together and give hope, these are really some very serious and important intangibles that the community could use right now. For something like that to happen and be swept away under these circumstances, it just adds to that. “

Indeed, it is. And it is impossible not to wonder: if this was a pair from a competing country like the United States or Russia, would there have been more urgency? Of course, that shouldn’t matter – the basic ideal of the Olympics is to respect all competitions equally, regardless of fame or fortune. But while this ideal is difficult to defend at the best of times, this unprecedented COVID situation may have yet exposed unfair disparities.

And so they wait. This script has no resolution. Still.

â€œWe have worked so hard to make this dream come true for years. We followed all the rules and were in perfect health. To be deprived of such an opportunity because we received false information has been devastating, â€the two men said in their official statement. â€œAll we want is the chance to represent our country and show the world that we deserve to be there. We hope the ISU can conduct a full investigation and work things out. “

Tara Sullivan is a columnist for The Globe. She can be reached at [email protected] Follow her on Twitter @Globe_Tara.